The Montreal School of Theology is an ecumenical body consisting of three autonomous theological colleges affiliated with one of Canada’s leading universities, McGill University. Students of the School are registered at one of the denominational colleges (either the United Theological College or the Presbyterian College or the Montreal Diocesan Theological College). Students in the M.Div. program also have to register at McGill University.

The mission of the Montreal School of Theology is equipping faithful leaders for ordained and lay ministries in the church and the world.

We are committed to building a consortium that values:

Our vision is to support a faith-based learning community within a collaborative ecumenical partnership, that encourages:

We serve students and lay people from various Christian traditions and from around the world. We are committed to building a faculty with strong academic formation as well as ministerial and leadership experience.

Over 100 years ago, in 1914, a major ecumenical initiative in theological education was created in Montreal – we believe it was the first in North America and one of the first two or three in the world.

A group of colleges associated with McGill University came together, under the encouragement of lay business leadership, to provide education to future Christian leaders. These colleges – Anglican, Presbyterian, Methodist and Congregational – kept their own identities, but worked together to provide strong teaching capabilities  – it was therefore a consortium, in which even to this day, students can be educated in their own denominational tradition, but with exposure to the traditions of other churches.

Over the years, membership has changed, and now include the Anglican, Presbyterian and United Church seminaries.

The consortium from the beginning has been affiliated with McGill University – students take their first two years of study in the highly regarded McGill School of Religious Studies, and then spend a final year in their own College.

The relationship with McGill has also evolved over the years, with the roles and responsibilities of the various parties most recently clarified and defined in a Memorandum of Agreement signed in 2016.

Building on this unique and successful heritage, the school looks forward to the future with renewed enthusiasm and vigour. 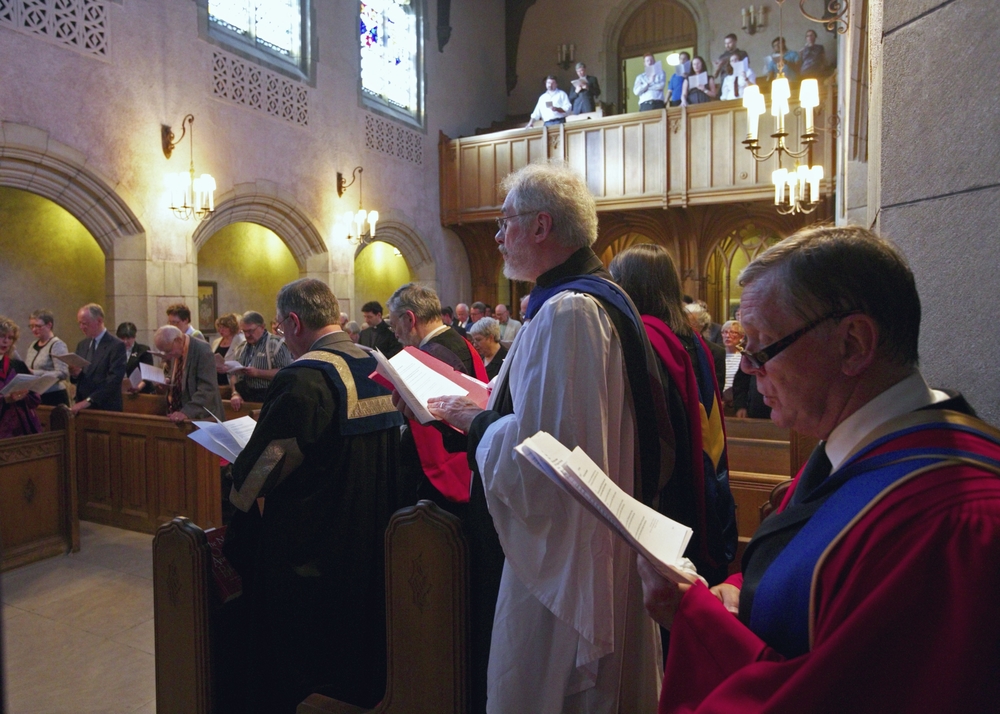 The Montreal School of Theology is accredited by the Association of Theological Schools in the US and Canada (ATS) since 1989. The following degree programs are approved by the Commission on Accrediting: Master of Divinity.

ATS is a membership organization of more than 250 graduate schools that conduct post-baccalaureate professional and academic degree programs to educate persons for the practice of ministry and for teaching and research in the theological disciplines. The mission of The Association of Theological Schools in the United States and Canada is to promote the improvement and enhancement of theological schools to the benefit of communities of faith and the broader public.

The Montreal School of Theology (MST) publishes this public Statement of Educational Effectiveness in accordance with the Standards of the Association of Theological Schools (ATS). MST is a full member of ATS, which accredits programs of graduate theological education in the United States and Canada.

The mission of the Montreal School of Theology is to equip faithful leaders for ordained and lay ministries in the church and the world. In fulfillment of its mission, MST offers a Master of Divinity (M.Div.) program designed to prepare people for professional ministry within a variety of contexts such as congregational or parish ministry, chaplaincy or spiritual care in institutional contexts, and outreach or community ministries.

Each year, the Montreal School of Theology evaluates learning outcomes and assesses student satisfaction with their educational experience using a variety of tools including a comprehensive learning effectiveness assessment program (LEAP), course evaluations, student-self evaluations, and the Graduate Student Questionnaire administered by ATS.

Time to Complete the Program

Between 2015 and 2017, a majority of our students (58%) finished their program in three years, while 89% finished the program within four years

Vocational Placement of our Graduates

In 2015, MST began a new learning effectiveness assessment program (LEAP) to assess how effectively we are meeting learning outcomes for the program. Student portfolios, self-evaluations, and narrative evaluations by field education supervisors, faculty, and lay committees are analyzed using standardized rubrics to determine how effective our program is in teaching our six core M.Div. program goals. Each year, over a three-year cycle, two of the six goals are evaluated.

To date, our analysis has demonstrated that:

The Montreal School of Theology is affiliated with the School of Religious Studies (SRS). This affiliation takes form throughout the M.Div. program and is reflected in the administrative and decision-making structure.

Students studying at the Montreal School of Theology who have an active McGill ID card and are currently McGill students (M. Div. I and II students) have access to all electronic resources (on campus and remotely) and services (including borrowing privileges and Interlibrary Loans) available through McGill Libraries.

M. Div. III students and students who are not registered at McGill (such as those taking certificate/online courses) have different privileges. See below for more information about library access for each of these groups. Please also see our “Other library resources” section for more options for those not registered as McGill students.

Electronic resources: you can access McGill’s e-journal, e-book and database collection on site with a guest login at a McGill Library. No remote access is provided, however.

Borrowing books and other services: As per the “Borrowers from Other Quebec Universities” page, “Faculty members and 3rd year Masters of Divinity students of the Montreal School of Theology who don’t already have a McGill ID may request a McGill Library Borrowing Card on presentation of a letter from the School.” This letter will be presented to you at orientation and  will allow you to borrow books and other physical materials from McGill libraries (including the Birks Reading Room) as well as the Rev. Dr. Joseph C. McLelland Library at the Presbyterian College.

Electronic resources: if you are in Montreal, you can access McGill’s e-journal, e-book and database collection on site with a guest login at a McGill Library. No remote access is provided, however.

Borrowing books and other services: in order to borrow materials from McGill Libraries you will have to purchase a McGill Library Borrowing Card.

In addition to the resources mentioned above, you may also have access to other resources, specifically: